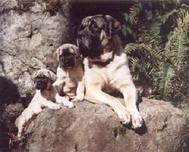 The Clown
8 Months...
Steele was quite the clown.
He really lived up to
​his name...
He was VERY inquisitive and Always in trouble.
He showed a lot of expression and personality
in everything that he did.

The Proud Papa
Steele was bred to Ice and produced a wonderful litter
​of puppies…
the two pictured here are Faith and Noah.

The Young Show Dog
Steele's First Major!!!
This was the most exciting day!
Steele went Winner's Dog
out of the 12-18mo class
​over some very nice open dogs...
and the best part was
he was owner handled! 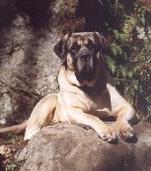 This was Steele's favorite past time!
In this picture all four feet are off the ground...
and he did catch
​the Frisbee!

Steele received his AKC championship, owner handled, at the Seattle Kennel Club show
on February 28, 1999. He also received his International championship at the Ridgefield show on December 5, 1999. At the ripe old age of 5 1/2 Steele took BOB 2 out of 3 days in Canada
to give him 7 out of 10 points needed for his Canadian Championship.
I just wish I had gotten him back up there to get those last 3 points...but we never did.

Steele was our very first Mastiff and was the start of many wonderful things to come.

Anyone that thinks that Mastiffs don't do anything but sit on the couch, eat, and drool should have seen Steele. His favorite past time was playing Frisbee.  He would get all four feet 2-3ft off the ground
to catch his Frisbee! We are sure he thought he was a Border Collie!
And he moved like the athlete he was.  He satisfied all the desires we had for an active dog.
He did tend to be a bit of a Momma's boy, however.

We have decided that Mastiffs are the closest thing to human children you can get
​and still have it be a canine. 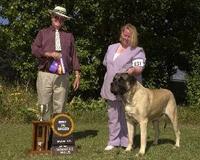 The Mature Show Dog
Steele took BOB 2 out of 3 days
in September to obtain 7 points towards his Canadian Championship!
On this day he was awarded
the Challenge Trophy by
beating the Special that had won it the previous 2 years!

May 15, 1996 - August 15, 2006
Oh, babe...there are no words to explain how much you have meant to us.
You were our first.  You taught us so much.
​You were a true gentleman, momma's boy, ​loving companion.
There was no one better to watch movies with.  You were wonderful with puppies.
​My only regret was not getting you to the ocean one last time as I know how you loved it so.
Thank you and know that we will always love you.