Growing up...
Fire is still young but is growing up to be a very nice boy. Great head, depth, bone, etc...

Fire was the light of our lives.  He was taken from us way too young.  Fire died of bloat.
This was our first case of bloat and even though we had read up on it...his was not a classic case.
We did the surgery on him but there was too much damage and we lost him 2 days later.

Fire won Best Opposite Puppy at the
​PNMF Fun Match 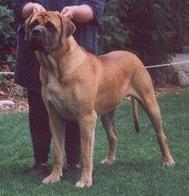 Thank you to Larry Clark for handling Fire to this win!
Fire was a big boy and a LOT of dog for me to handle.
After 2 days of Winner's Dog with everyone telling me that
I needed to move him out and me telling them that I was going as fast as I could...we let Larry take him in on Sunday and look what happened! Fire LOVED to show and I just didn't do him justice! 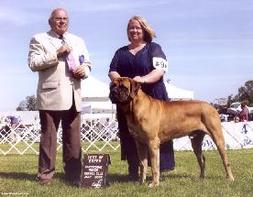 Fire is a very goofy boy! This picture says it all...

Fire was happy to be back in the ring after an injury. He was a very happy boy and has passed on his great head, topline, color, and personality to his kids. 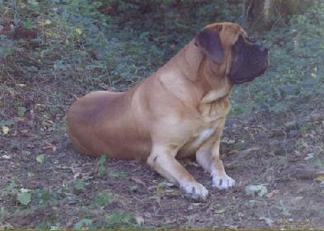 Fire produced 3 beautiful litters of puppies.
We were fortunate enough to have 2 of his daughters and Layla's litter are his grandkids.
Knowing that we have this link to him helps ease the pain of his loss.

This big guy started stacking on his own very early...from this picture you would NEVER guess the headaches he gave me at class! 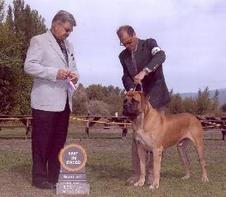 His eyes are just starting to open and he is developing quite the personality. 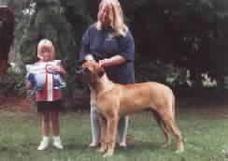