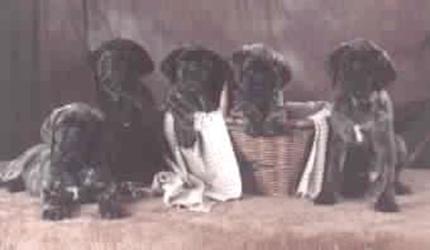 This was our second breeding.  We were very excited because not only did we feel that conformationally Gus and Lacey were a good match, they were both brindle and both of Gus's parents were brindle...so...that is an awful lot of our favorite color...BRINDLE!!!

Well, we were not disappointed.  There were 5 puppies in the litter and they were ALL Brindle!
This is Party & Georgia's litter! They were born September 9th, 2000 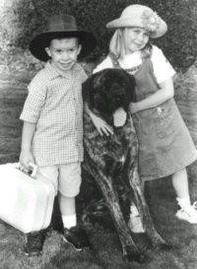 Wizzer became Ben.  He is pictured here at 1 year with his new siblings.  Ben is a very lucky boy to have such a wonderful family.  He required more surgeries when he went to his new home and lots of special care.  We feel very fortunate to have him living with such a wonderful family.  They chose to take him on knowing his special needs and never looked back.  As a breeder...we couldn't have asked for more.

This is Shadow.  He moved to Aloha, OR with his new family.

Ben is pictured here with his mom and siblings.  Ben lost his battle shortly before his third birthday.  His family did everything imaginable for him but it was his time.

The amazing thing is that they lost him right when we found out that his littermate sister, Georgia, was having her first litter.  We were very proud to have Max go live with them. 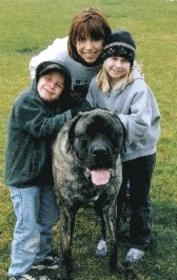 This is Wizzer.  He had a very rough start in life.  He was born with a serious birth defect due to unforeseen complications from Lacey's first c-section.  He had 3 surgeries in 4 days and if he were not such a strong and stubborn little fighter we would have let him go.  But, he wasn't ready to let go!

Here is Wizzer at 5 weeks.  He is such a survivor!

(The photos on this page are salvaged from our old website and computer.  We hope to replace them soon with better quality files.  Hopefully we did not lose too many of them when the site went down!  Thanks for looking!)

This is Hera.  She moved to Olympia, WA with her new family.